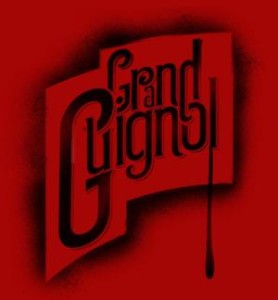 Andrade Events and Ottoman, Ltd. are proud to announce the North American premiere of GRAND GUIGNOL, a horror play by Carl Grose, inspired by the Theatre du Grand Guignol and naturalistic horror stage shows that were all the rage in London and Paris in the early 20th century. Directed by Mitchell Altieri, GRAND GUIGNOL will play at Z Space (450 Florida Street, San Francisco) Wednesday, October 30 through Sunday, November 3, 2013. Rife with madness and murders, maiming and mutilation including jaw-dropping special effects and a dose of humor and satire – GRAND GUIGNOL creates the perfect Halloween experience – complete with food and drink – for a bloody good time. Scenery is designed by Charlie Smith, costumes by Thomas Marquez, lighting by Pamela Z. Gray and hair and make-up by Shae Smoot. Performances are Wednesday, October 30 through Sunday, November 3 at 7 p.m. and 10 p.m. There is a Sunday matinee at 2 p.m. Seating options for the GRAND GUIGNOL range from “splatter zone” seats to “shock boxes” that feature a VIP experience including a pre-show dinner, unlimited champagne and Grand Guignol signature cocktails. There will be a special Halloween themed package available on October 31 that will include an after party at Inner Mission (2050 Bryant Street, San Francisco). Tickets ($15 to $195) go on sale Tuesday, October 1 and may be purchased at www.GrandGuignolSF.com.

GRAND GUIGNOL is set in 1903 Paris. It takes place in the back streets of Montmartre, just as the Theatre du Grand Guignol opens its doors to an unsuspecting public, who quickly become fascinated with the terror they experience. The psychiatrist, Dr. Alfred Binet, becomes obsessed with the theatrical horrors on display and ingratiates himself into the company. Here he meets Andre De Lorde, the premiere playwright of the theatre. Binet seeks to unearth the reasons why De Lorde writes such horrors, but in doing so inadvertently becomes the writer’s new muse. Soon, the Grand Guignol is a huge success. Things become complicated when a serial killer known as The Monster of Montmartre begins spilling blood (real blood) on the streets, and De Lorde reveals his previous collaborator was none other than the ghost of Edgar Allan Poe. Binet begins to lose his grip on what is real and what is not, as the boundaries between theatre and truth begin to blur.

Says director Altieri: “I was first approached to direct GRAND GUIGNOL while still in post-production for my most recent film. As a film director, I thought it a bit odd that producer Charlie Smith approached me about a theatrical production, but it made sense after I read the script. I instantly fell in love with the work, and realized this production was going to be completely out of the box. Charlie and his partners wanted me to bring my vision as a horror filmmaker to the stage and create something that fused horror fans and theater lovers to one experience.”

“The moment I first heard about the Grand Guignol I knew I had to write a play about it,” says contemporary playwright Carl Grose. He continues: “I’m a huge horror fan – and, while the horror genre went from strength to strength in cinema and literature, it was very clear that there was a huge dearth in theatre. Horror, good horror, is hard to do on stage. I wanted to try to write a quality horror show for the stage. I loved the notion of the psychiatrist becoming obsessed with horror and theatre. The natural extension of this digging around in someone’s subconscious was that he’d have to go mad. Why? Because he couldn’t tell what was real and what was theatre. And it was here that I began to get really excited that this play would also play with reality. This production of GRAND GUIGNOL is set in a theatre, a theatre of the mind. Maybe the characters’ or maybe yours.”

GRAND GUIGNOL performances are Wednesday, October 30 through Sunday, November 3 at 7 p.m. and 10 p.m. There is a Sunday matinee at 2 p.m. Seating options for the GRAND GUIGNOL range from “splatter zone” seats to “shock boxes” -a VIP experience featuring a pre-show dinner that includes an assortment of French delicacies catered by the France Delices food truck, unlimited champagne and Grand Guignol signature cocktails. There will be a special Halloween themed package available on October 31 that will include an after party at Inner Mission (2050 Bryant Street, San Francisco). Tickets ($15 to $195) go on sale Tuesday, October 1 and may be purchased atwww.GrandGuignolSF.com.