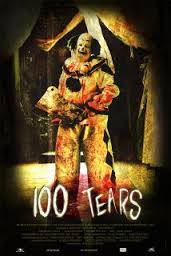 Gore fans unite! 100 Tears is a splatter fest for the sake of being a splatter fest; no more, no less. In the first fifteen minutes alone there are multiple beheadings, a dismembering, and entrails spilled onto the floor. Make no mistake, this is one gory film.

The good news is that the film was directed by Marcus Koch, who is a special effects artist and has worked on many independent films. All of the effects in this film are homegrown and harken back to the kind of over the top splatter that we saw on a regular basis in horror films from the eighties. The effects are “Tom Savini- esque” in their creativity and execution. I was immediately hooked and settled in for a bloody good time.

The film concerns the escape of a crazed clown, Gurdy, called “The Teardrop Killer” by the press. He went on a murderous rampage after falsely being accused of rape while he worked happily in a circus. As slasher movie rules state, years later he escapes from his mental facility, which makes the opening fifteen minutes a bloodbath, and goes out to search for a young woman, Christine, who may be his daughter. All the while, two investigative reporters are on the killer’s trail while they put together a story concerning the murders.

I am not giving anything away when I tell you that Christine is as twisted as her father and becomes a willing participant in his vicious and unrelentingly violent murder spree. There is a moment of extreme excess where father and daughter slaughter many victims while we see Christine becoming more and more elated. It is a truly twisted “family time” kind of moment.

The film is a rehash of all of the slasher films that have come before it and cleverly mixes sly nods to other films in the genre and a few small jokes. For example, one of the detectives on the case has the last name of Spaulding which was Sid Haig’s character’s last name in Rob Zombie’s House of 1000 Corpses and The Devil’s Rejects; the name itself being a reference to a character played by Groucho Marx, so the nods go on and on. The other detective is named Dunkin in what seems to be a reference to the old cops and doughnuts joke, which is a bit tired by now.

The character of Christine, and the performance by Raine Browne, is an obvious take on Sheri Moon- Zombie’s over the top “Baby Firefly” character from Rob Zombie’s films. Browne doesn’t fair as well in the acting department, as we see that she is trying a bit too hard to imitate Zombie.

The two reporters are played by Georgia Chris and Joe Davison, the film’s writer. Their characters are well written although the acting is lackluster. It is interesting to watch how Chris’ character manipulates the cops, one wants to sleep with her, and finagle her way onto the crime scenes to further follow the trail of the killer. The two reporters’ scenes are interesting and move the film along when it begins to drag, which is not too often. The director doesn’t give us much of a break in between the carnage.

The killer clown, played by Joe Brown, is an okay villain, though he won’t go down in horror history as a classic killer. He doesn’t do much besides slaughter and he never says a word. I suppose it is a decent performance but, frankly, anyone could have done it.

The problem with the film is its low budget. The script was better than the cast involved and the filmmakers deserved more money to find proper actors to speak the well written dialogue and to give the film a more polished look other than the home video quality that exists.

However, at times the low budget look helped with the enjoyment and made the film an easier pill to swallow. The cheap look adds to the feeling that you pulled this off of a rental shelf at your local video store circa 1985. Back then the shelves were filled with ultra-low budget splatter films and 100 Tears would have fit perfectly among them.

While I like this film, it is no classic and is certainly an acquired taste. Fans of pure, old fashioned, gore effects will like it a lot, as will fans of old school 80’s slasher films. I’m not sure many of today’s horror loving youth will get what it is trying to do in its style nor will they be able to get beyond the low budget presentation. There are no “jump scares” that today’s audience mistakes for being scared. The film is straight up blood and guts, and plenty of it!

100 Tears is a good night’s rental, or Netflix queue up, that will give splatter buffs the fix they need. There aren’t too many films like this one that get made these days and 98 percent of those that do are garbage. This film fell through the cracks but it is a worthy, and extremely bloody, good time.