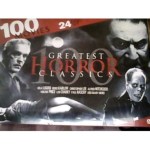 This is going to be a two for one review because you should know exactly what these are. They are the combo DVDs you see everywhere where a company, in this case Mill Creek, takes a whole bunch of public domain movies and bundles them together in order to make a few bucks. There’s nothing wrong with that, but there’s nothing exciting about it either. And the same can be said about these two new mega packs. However that doesn’t mean there are not a few movies of note to be found in these bloated bundles.

The 100 Greatest Horror Classics combines two previously existing 50 packs called Legends of Horror and Horror Classics. So if you have one or both of those, know that they are exactly what you get here. Now while the vast majority of the films collected in both of these mega packs read like a who’s who of Mystery Science Theater 3000, there are some good, classic, or just classically campy movies sprinkled throughout. On the horror side of the street, notable titles for me were Carnival of Souls, Dementia 13, Dr. Jekyll and Mr. Hyde, Horror Express (for some ’70s Hammer goodness), House on Haunted Hill, Hunchback of Notre Dame, Last Man on Earth (arguably the best adaptation of Richard Matheson’s I Am Legend novel), Little Shop of Horrors, The Lodger (for some Hitchcock fun) Night of the Living Dead, Nosferatu, Phantom of the Opera, White Zombie, and more. While there are plenty of turkeys to be found in this list of 100 movies, there is also a lot of good stuff. 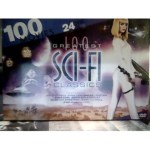 As for the 100 Greatest Sci-fi Classics – that one combines the 50 packs of Sci-fi Classics and Sci-fi Invasion. They include such highlights as Blood Tide (I love me some ’80s schlock), Gamera the Invincible (I love me some giant turtle action), and … well ok, I am not as well versed in sci-fi as I am in horror, so I don’t know many of these movies in this collection. There does look to be far more B-movies in this set that in the Horror one. Still you get 100 of them here so there’s bound to be other winners in here somewhere.

Now because these are public domain flicks, Mill Creek did nothing to brush up the quality on any of these. So as far as how good these movies look and sound, well that’s a very mixed bag. Some look fine, none really look all that great, and some look downright bad, bad, bad. But again, for public domain, what else would you expect?

While I really can’t speak for the sci-fi collection, the horror collection seems to be a must have for any horrorhead. There really are some classic flicks on there, not to mention a bunch of campy titles, that should be in everyone’s collection. And 100 movies for one low price (I’ve seen both of these listed on various online places for around $20), you really can’t beat that deal. Consider the 100 Greatest Horror Classics well recommended and the 100 Greatest Sci-fi Classics as sort of recommended.